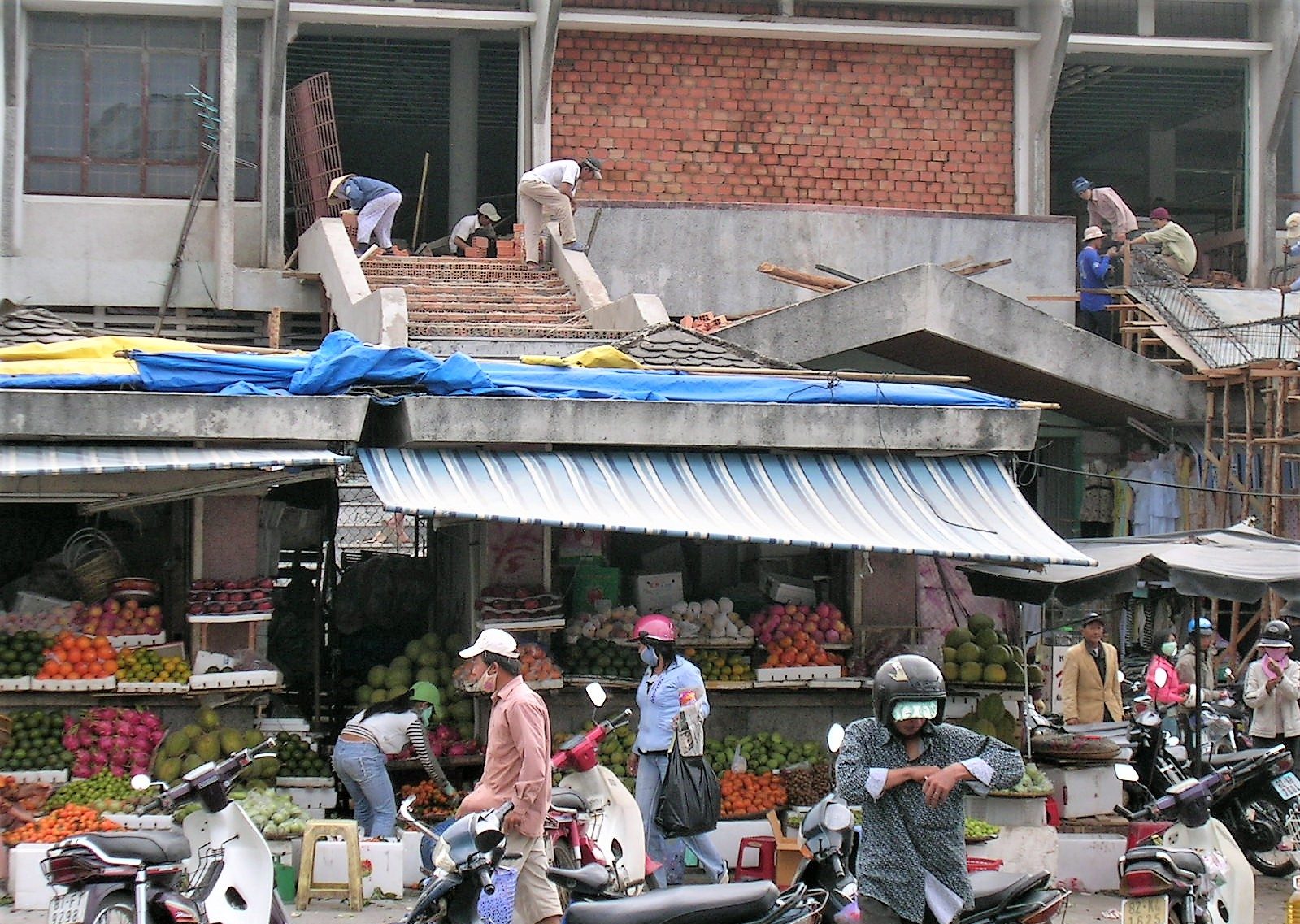 We met them near a van selling chips – or as the Americans call them, ‘French fries’.

Bram and Kristin. They were on a bike trip and so were we. It was a warm summer’s day and everyone was outside.

Behind the van was a long, wide canal. On both sides of the canal were bike trails and there was constant stream of bikes moving in opposite directions. Now and then, barges passed, sending waves of backwash slapping against the steep banks.

They were a similar age to us – late 50’s. Kristin had shoulder length blond hair (natural, with a few stands of grey) and Bram had a crop of black hair and a boyish face. Each of them were physically in good shape.

They sat down on the same bench seat as us eating chips and dunking them in mayonnaise. Like we were. After we were finished we made small talk but before we knew it, the small talk became big talk.

Foreigners often blurred the distinction between the Dutch speaking Flemish and the French speaking Walloons. Perhaps one was only conversant with the true dimensions of that division when one spoke Dutch and French – and visited the regions where one of those languages was dominant, as Anya and I had done.

In reality they were two different countries in one, with the Flemish in the north and the Walloons in the south. We went bike riding in the north, which was flat like The Netherlands, and we went walking in the south with its beautiful rolling hill country dotted with French chateaus.

Whilst the Flemish spoke Dutch the accent was completely different (it took me a long time before I could understand Flemish), but I had no problem in understanding Bram and Kristin probably because they were educated and travelled regularly; they spoke clearly, and their accent was mild.

In any case our conversation quickly moved beyond the stage of small talk when I asked them about the jets.

Normally when we rode to Flanders, we rarely heard jets flying overhead. But this time, as soon as we crossed the Dutch border, they were there. Every day. The noise was deafening. It defeated the whole purpose of going on a bike trip, leastways our idea of a bike trip.

Irrespective of where we went, we were always careful to plan a trip through forests and rural areas – and when possible, to avoid the towns and big cities. Peace and quiet was important for us. Yet this time, no matter where we were, we were accompanied by the awful, ear-splitting sound of jets.

The jets, Bram and Kristin explained, were practising for the approaching Belgium Independence Day celebrations.

In the past, most of the area now designated as Belgium was a part of The Netherlands. In the early 19th century, the Catholic Flemish joined the Catholic French and fought to push the Dutch out and form a new nation called Belgium. The Flemish did not want to be governed by a Protestant dominated nation (even though there was a large population of Catholics in The Netherlands, especially in the south).

Catholicism didn’t prove to be much of a bond. The newly formed nation of Belgium was dominated by the French. Dutch could not be taught in the schools or used in any kind of official institution including the bureaucracy, the army, and parliament. The economy played an important role in reinforcing the natural chauvinism of the French speakers. In the 19th century and well into the 20th, Belgium was one of the most industrialised countries in Europe. Extensive reserves of coal went hand in hand with the development of iron smelters and factories. The capitalist class controlling this economy were mostly French speakers or Flemish businessmen who spoke French (indeed, for any Flemish person to get ahead in Belgium, speaking, reading and writing French was a must). In turn, the working class Flemish, who laboured long days in the mines and factories, were subjected to a toxic mix of discrimination based upon class and ethnicity.

It took the Flemish almost a century to ensure that their language was accorded the same rights as the French. In the meantime, another change unfolded; Flanders, once a poor area largely controlled by French capitalists, became far more prosperous than Wallonia. It was this superior economic position which contributed to the surge of Flemish self -assertion which arose during the last decades of the 20th century. In recent times, this self- assertion was conspicuously represented by the so-called ‘Flemish League’ (Vlaamse Blok) – a right wing Flemish political party which wanted an independent Flanders or at the very least, an autonomous region.

The mention of Belgium’s ‘Independence Day’ got me going.

Independence? I said, ‘for whom? Not for the Flemish, that’s for sure. I’m not exactly enthusiastic about the Flemish League, but as far their push for autonomy goes, I can certainly understand that.’

Bram and Kristin’s reaction to my take on Belgium’s Independence Day was immediate.

Kristin: ‘Not many people attach much importance to Independence Day. It’s a ritual, a day off work and a chance to take the kids to a spectacle with fireworks and a procession. The King and Queen are there too -‘

Bram chuckled: ‘- and the jets! Don’t forget them!’

Kristin:’ History’s history. You can go back in time and you can find all sorts of injustices –‘

Me: ‘That doesn’t change the bitter reality of French domination in what was supposed to be a multilingual state, a partnership if you like.’

Anya weighed in support of Bram and Kristin.

‘Where does this grievance politics start and end? This is Europe. Everywhere you look there’s divisions. The Flemish go independent and then what? Would the EU recognise this tiny state? Of course it wouldn’t, otherwise the rest of Europe would disintegrate.’

Kristin: ‘Right. Every little community with its own customs and language would want its own state.’

Anya: ‘There’s s the Basques and Catalonians in Spain, the Northern Italians in Italy, the Welsh and Scots in the U.K., the Hungarians in Romania…..it’s endless.’

Bram: ‘If you look at the history of Europe, it’s an ongoing struggle between chaos and stability. That’s why in the past a lot of people supported dictatorial regimes, empires …. when democracy was tried, like in 1848, it led to upheaval…the liberals and the socialists and the ethnic minorities were at loggerheads, it was a mess!’

Kristin: ‘Everyone has complaints about the EU and a lot of these are legitimate. But no arrangement is perfect. People seem to think that if the nation states get more autonomy from the EU behemoth, they’ll be better off. It’s an illusion -‘

Bram: ‘And would the same nation states which want more autonomy look favourably upon the communities within their borders that also want more autonomy? I don’t think so. There’s an awful lot of hypocrisy in this nationalism business – ‘

Kristin: It’s a choice like you said Bram, between stability and chaos. Nationalism and regional chauvinism are the biggest threats confronting Europe today.’

Kristin: ‘The funny thing is, even though the Flemish and the Walloons are constantly bickering over language and culture, they would miss each other if Belgium was ever dismantled.’

Bram: ‘The Flemish have got nothing to complain about. They’re economically much better off than the French speakers in the south. You should see some of the cities there…really depressing…. high unemployment, decrepit infrastructure. How would autonomy improve the lot of the Flemish? It wouldn’t.’

Stir up a discussion?

I did that alright. No one agreed with me and I had to admit, after listening to the other three people vigorously disagreeing with me, my original opinion was looking dubious.

Still, I had managed to cut the ice; to break through the indifference which strangers adopt when they meet – and which ensures that when they part the ways, they are still strangers.

In hindsight, our debate on that warm afternoon was a quintessential European one. It could not have occurred in any other part of the world. The issues which surfaced, the disagreements, the questions – was an integral part of what it meant to be European. And if the very notion of a European identity was at best, a slippery one, leastways now people talked about the issues. In the past they had killed one another on battlefields and in death camps.

If you pondered just how look it had taken we Europeans (and I counted myself as a European) to get to this point then you had to take the long view about events in notoriously unstable regions of the world today including the Middle East and Africa. It was going to take time, a lot of time, before people there would one day be able sit down on a park bench and eat together and do no more than agree to disagree.

A good hour later, our discussion ended when Bram said: ‘It’s been nice to talking to you people, but we better get back on our bikes, we’ve still got a way to go before we reach our hotel.’

We also had a way to go too – to reach a room rented out by a family.

Before we parted the ways, Kristin invited us to stay with them. They were near the end of their bike trip and due home in a few days. We wrote down their address.

A week later we phoned them up and rode over to their place.

We were in for a surprise.

Next blog: Chips and Mayonnaise Part 2