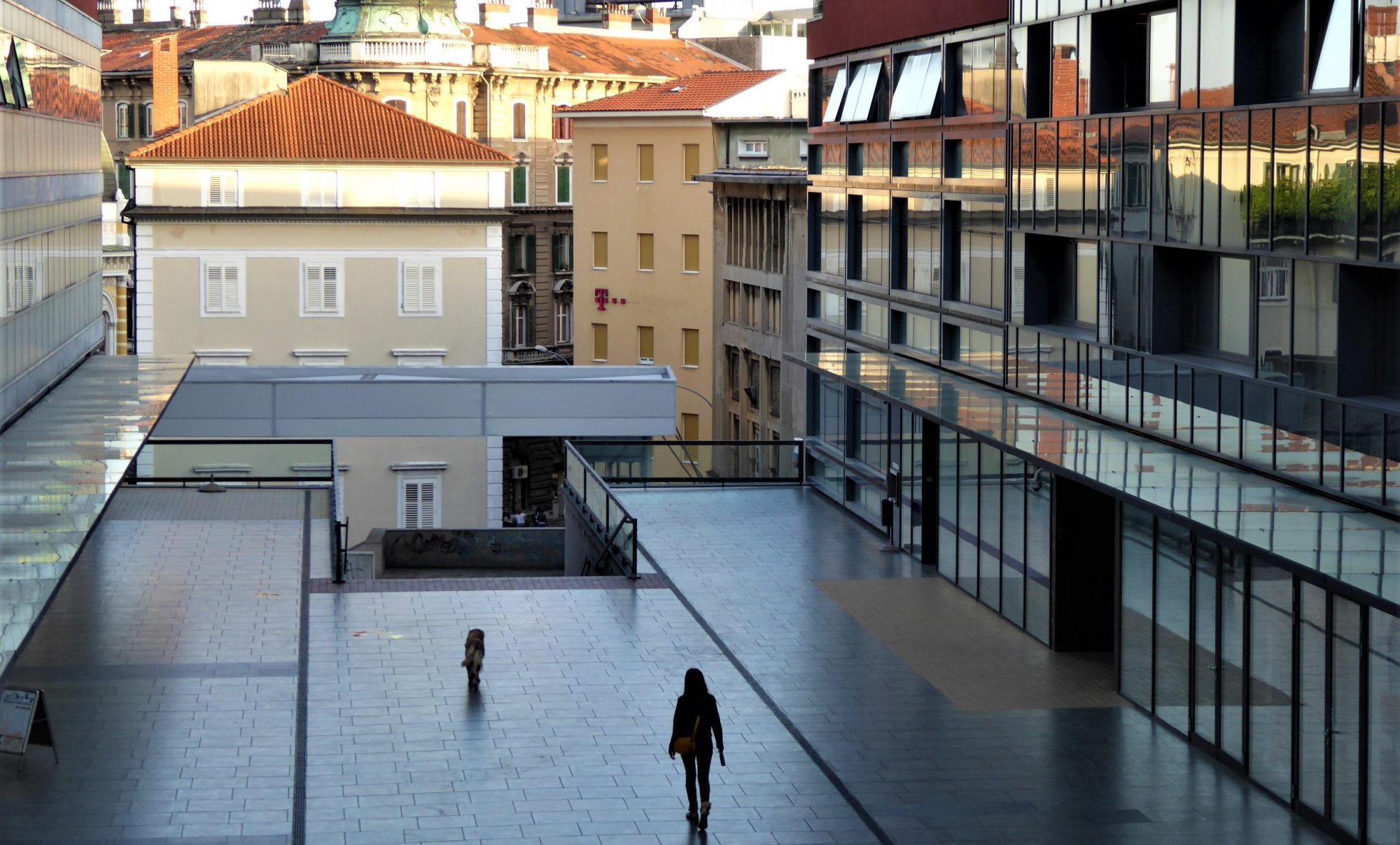 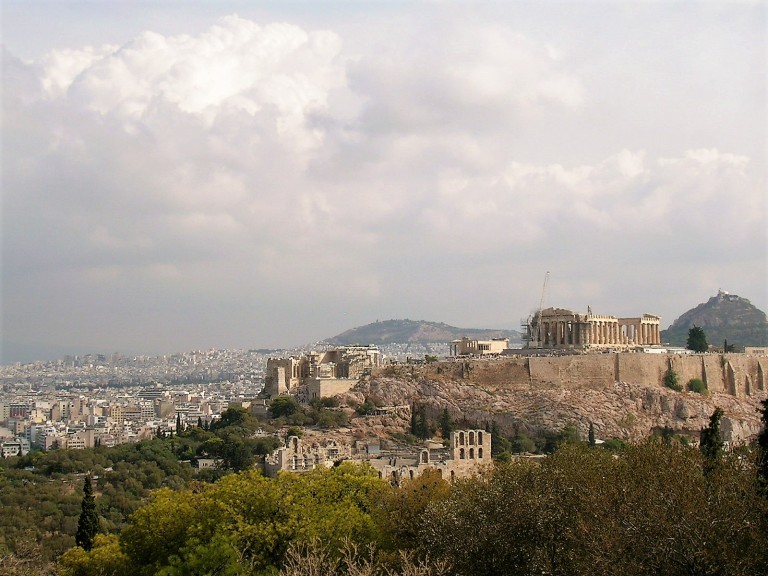 As my flight neared Athens airport, I looked out my window and was surprised by what I saw. Beneath me was a barren, dry landscape of rocks, low hills and ocean. There were very few areas of arable land, let alone rich farmland. There were no rivers or lakes. It was a country which at first sight seemed to me more likely to be a place where humans had to struggle just to survive, never mind think great thoughts and ask big questions……

On top of my list of the tourist sights I wanted to see in Athens was the Parthenon. In other words, I was no different to the millions of other tourists who visited Athens all year round.  Perched on a steep sided, flat topped outcrop in the centre of Athens called the acropolis, the Parthenon dominated the city skyline and could be seen from far distant. It was something which one immediately associated with Athens.

Constructed in the 5th century BC, there wasn’t much left of the original Parthenon, besides a couple of rows of fluted stone columns. On their own, those columns gave one no idea of the original structure; they were like a few bones lying on a beach which a scientist might inform us once belonged to a blue whale. Originally there were many more of the fluted (‘ionic’) columns: two rows of 8 columns at either end and 17 on the sides. The columns had supported a massive stone roof or ‘entablature’ the sides of which were engraved with scenes from the rich pantheon of ancient Greek mythology. At either end of the Parthenon were triangular gables filled with sculptures.

When the Parthenon was built, the city state of Athens was at the pinnacle of its glory; it was created by a city-state which was turning out so many other masterworks in so many other, different spheres of endeavour. Athens’s rise to greatness began with the birth of a radical new system of government called democracy (derived from two Greek words ‘demos’ and ‘kratia’ and meaning literally ‘people power’). One of the most dramatic consequences of this new system was the creation of an environment in which free thinking could flourish. Men were free to think aloud and to argue in favour of their ideas and opinions. They were free to explore new avenues of scientific and artistic endeavour. ‘Truth’ was no longer the monopoly of God or a tyrant; it was up for grabs and men contested its meaning. Out of that ancient Athens came the arts and the sciences which we take for granted today including drama, mathematics, astronomy, medicine, history, philosophy, architecture…..the list is endless.

From its very beginning, Athens’s system of people power was threatened by external powers far more powerful than Athens. Firstly by the combined forces of the other Greek city states including Sparta and far more ominously, two invasions by the mighty power of Persia, which dwarfed Athens in terms of its army and navy. Both Persian invasions were, against enormous odds, defeated. People power survived, at least until the end of the 5th century BC. 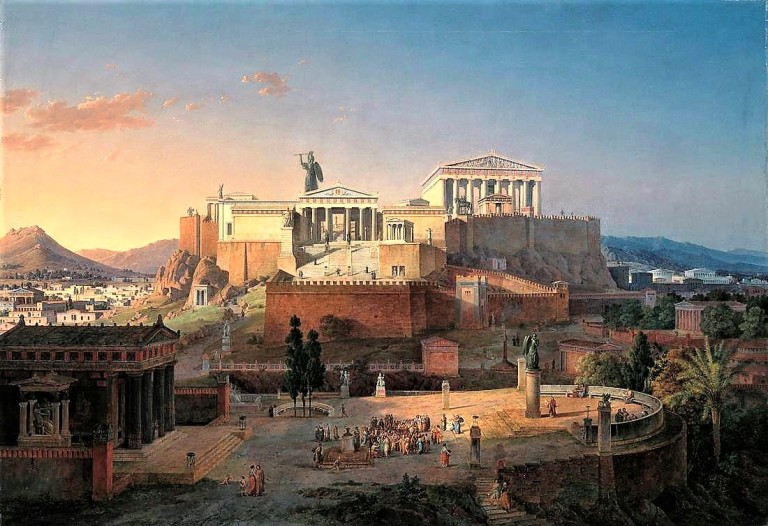 An artist’s impression of the original Parthenon – done in the late 19th century.

The story of Athens’ rise to greatness is one of the greatest dramas ever staged on the theatre of human history. I came to Athens in the attempt to somehow get a bit closer to that drama, never realising that I was, at the same time, going to be witness to another very different kind of drama, one far closer to home as it were – i.e. at the small hotel which I had booked shortly before flying out of Amsterdam.

The hotel was located in an area of Athens called ‘Ommonia’ which was popular with budget travelers because of the surfeit of cheap accommodation, though it had an unsavoury reputation. I soon found out why. Emerging from the underground metro station, I was met by a maze of shabby buildings and narrow, traffic congested streets. I walked down sleazy alleys where groups of men – Africans, Arabs, Indians and poor, down and out Greeks – foraged in over filled industrial sized rubbish containers. On small squares people were hunkered down sleeping on bench seats. The place was a chaos. Later I found out that even Greek taxi drivers got lost in the area.

After a lot of walking around and asking for directions, I found my hotel. It had a very small frontage and it was sandwiched between shops, cafes and sleazy bars. I entered the hotel and was greeted by a bizarre sight: behind the reception desk, under a fluorescent light, was an old lady sitting in a wooden chair reading a bible.

The old lady was very old; her face was as wrinkled as a prune. She was thin and slightly bowed. She was wearing a long loose fitting black dress tied at the waist with a blue sash. Hanging over her head was a long, loose headscarf, the edges of which were lined with a blue-embroidered motif. On the wall behind her was a brightly coloured, plasticized hologram poster of Jesus.

The old lady said something to me in Greek. It sounded like a shrill bird cry. Then she got up, put her bible down on the reception desk next to an old computer, and motioned for me to follow her down an adjoining corridor. The corridor was poorly lit, gloomy. Half way along, there was a staircase on the left. At the end of the corridor was a dark red curtain. The old woman pushed the curtain aside, opened the door, and led me into a combined dining/lounge room.

What was I getting myself into here?

Even on first appearances, I sensed that this was not a place for hotel guests; that it was some kind of private sanctum.

As I entered, I noticed passages leading off either side of me. Directly in front of me there was a dining table and chairs, and nearby, easy chairs and couches. Everything looked dated. There was a lot of wood, even wood paneling on some of the walls. On my right there was a long wooden counter and behind it, a stove, fridge and sink. Above these was a row of dark wooden cupboards. At the far end of the room were windows blanketed out from the sun by dusty venetian blinds. In a corner of the room, near an old style polished wooden coffee table and a TV set, was a fat man lying back on a couch preoccupied with his mobile. Flashes of light strobed the dimness. We walked over there and the old lady yelled something.

The fat man looked up, arose, and holding his phone in one hand, introduced himself. He said his name was Ikis. He was in his mid-30’s and had thick, brown curly hair and a boyish face. He spoke very good English and as I found out, he liked talking. I explained that I had a booking. I accompanied him to the reception desk and he checked my booking on the computer. Then he grabbed a set of keys and asked me to accompany him upstairs. My room was on the top story.

There were four stories. We began ascending the stairs.

Wasn’t there a lift?

I was tired after all that work finding the hotel and my rucksack was heavy with books about ancient Athens, including British historian Tom Holland’s brilliant ‘Persian Fire’.

It was September and that year, temperatures were well above the average. It was over 30 degrees Celsius that day.

The room was nice enough, especially for 25 Euros. It was clean with an attached bathroom. At the end of the room there were two glass doors and behind these, French-louvered doors painted dark brown which opened out on to a small balcony. There was a fan which Ikis turned on. It made a loud noise but that was fine by me. As long as the noise was constant, I would be guaranteed of getting a good sleep.

What I did not see was the giant billboard outside my room advertising Camel cigarettes. There was a large image of a camel with a paper bag over its head. I never did get around to asking Ikis about this. 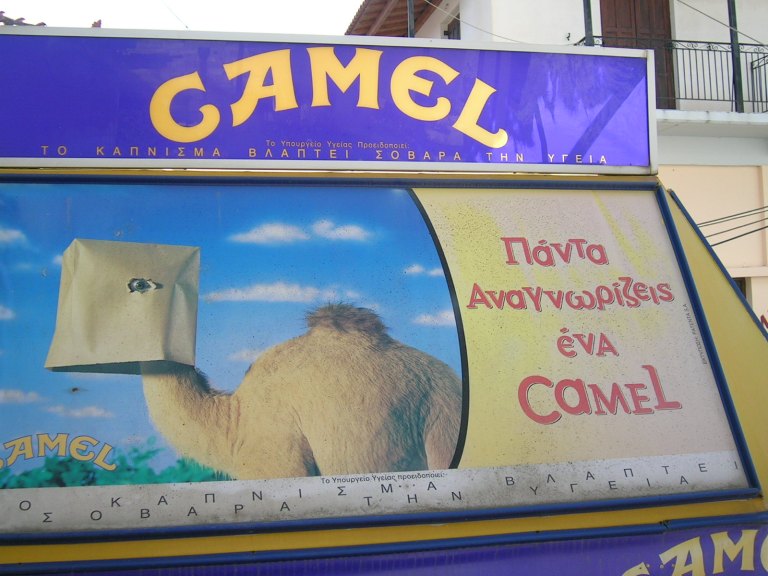 Ikis took a shine to me.

He said he liked practicing his English and that he didn’t get much chance to do that because most of his guests were Eastern Europeans or Greeks. It was a mystery to me why he felt he needed to practice his English because it was fluent.

Whilst doing so, Ikis pointed at the red curtain at the end of the corridor – the lounge/dining area that the old woman had led me to when I arrived at the hotel – and explained that whilst was not meant for hotel guests – I could go there whenever I liked to cook something for myself or use the internet (there was Wi-Fi there unlike the rest of the hotel). It was a special privilege.

We got talking about the hotel. I liked asking questions and he liked talking.

‘My family is originally from a village on the Pelion peninsula on the east coast of Greece. We came to Athens in 1980 and shortly afterwards my father arranged to have this hotel built. That was when tourism was really taking off in Greece. My father was a good businessman, but he was also here at the right time. We lived on the ground floor, my sister and I, my grandmother and my parents. My mother and father are dead now. My mother died two years ago, just as the economic crisis was really getting bad. Only my grandmother and I are here now.’

Ikis was worried about the hotel. It had 15 rooms. It was a long way from full. With the decline in tourism, Ikis was struggling. He explained:

‘I need to invest in the hotel and modernize it, but I don’t want to do it now because the income from the hotel is going down and there’s no sign that the economic crisis is going to end any time soon….’

There was a conundrum here alright. The hotel was cheap and that was its only positive side. It was old and run down. The fittings were the original ones installed in 1980. The taps leaked, the walls were stained, the cupboards scuffed. The hot water service didn’t work, which didn’t bother me, but it might well bother other guests.  As Ikis admitted, he was no businessman. He had a degree in economics, but he was nothing like his father.

I asked him about his grandmother.

The emphasis was placed on the last syllable ‘sia’ – ´aspa-SIA´.

‘She lost her husband a few years after the war. She came to live with us in Athens. She raised my sister and I after our mother got sick. She fed us and looked after us….’

‘I love her very much! She is like a mother to me.´

It was a heartfelt declaration.

At this point in time, I didn’t devote a great deal of thought to the rather odd situation of a single man in his 30’s running a hotel with his 95 year old grandmother.

All I could think about was how to reach The Parthenon from my hotel – which seemed like no small task given how easy it was to get lost in this maze-like area of Ommonia. 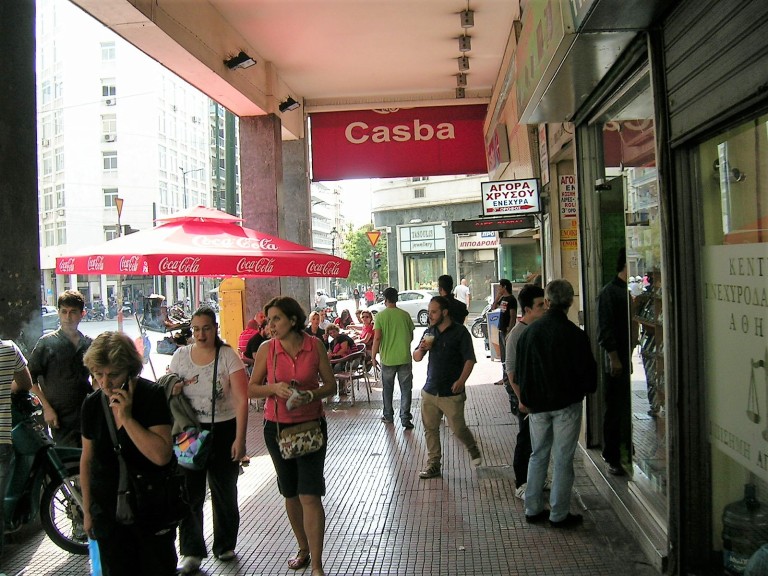 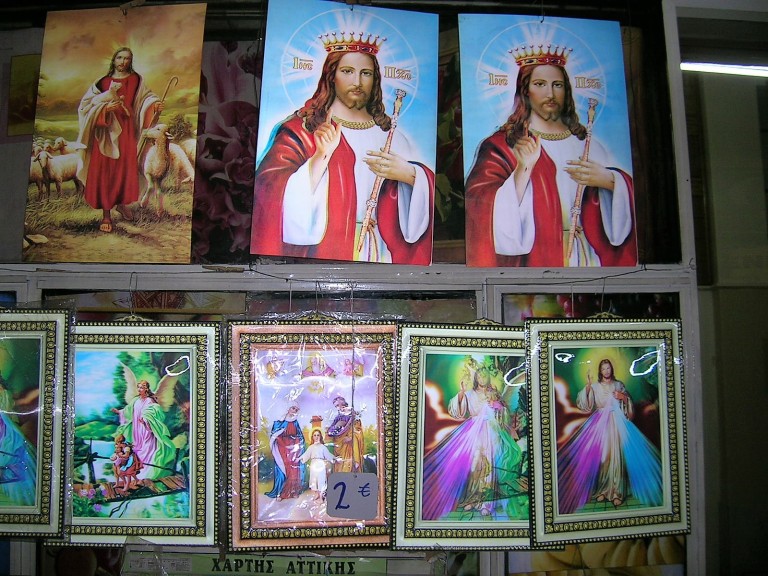 Hologram posters on sale in Ommonia

Focus on The Philippines – Part 1