In the nearby town, about a kilometer away, there were a few hotels and restaurants. Out at the beach, there were some small apartment complexes set back in the hinterland, amongst olive trees.

There was only one hotel on the beach front and that’s where we were staying.

It was October and we were the only people there……

The hotel was pretty basic. It badly needed renovating. There were twelve rooms. The rooms were very small but they had their own cooking facilities and oddly enough, very large balconies. We were on the second story at the front. As long as the weather was sunny, the balcony was a fine place to spend time; we had a view of the beach and the ocean, and the high rocky promontories at either end of the bay.

On the beach directly in front of our hotel was an open-air snack bar under a flat, thatch roof. It had a floor of weathered planks. The snack bar was shuttered up. There was still a board with a price list attached to one of the support poles.

The snack bar became a familiar fixture in our lives.

In the evenings we sat near the end of the floorboards, where they met the sand, and looked out to sea. We had two chairs to sit on which had been left behind because they were very much worse for wear; loose, wobbly, but nevertheless with a bit of care, possible to sit on, especially if one didn’t move around too much.

After a while we got used to them.

The sea, the sound of lapping waves, a sky dotted with stars.

One cat, the younger of the two, was white. Completely white.

Neither cat attempted to attract any affection from us. Neither cat mewed or purred. They were like two miniature sphinxes. The four of us sat there every night, staring out to sea.

And so began the routine: night times we would go to the snack bar and grab the chairs and sit down – and right on cue, the cats would appear and take up their respective positions.

I was amazed. Then again, I didn’t know much about cats. As a kid, I had been raised with dogs.

Anya told me that cats were enigmatic. They liked to be near humans but also liked to be by themselves. They were social but in a very different way to dogs.

Casey the cat, she answered.’Casey the Cat.’

In the evenings: dinner on our balcony and afterwards: sitting on those rickety wooden chairs under the thatch roof of the snack bar with Alby and Casey. 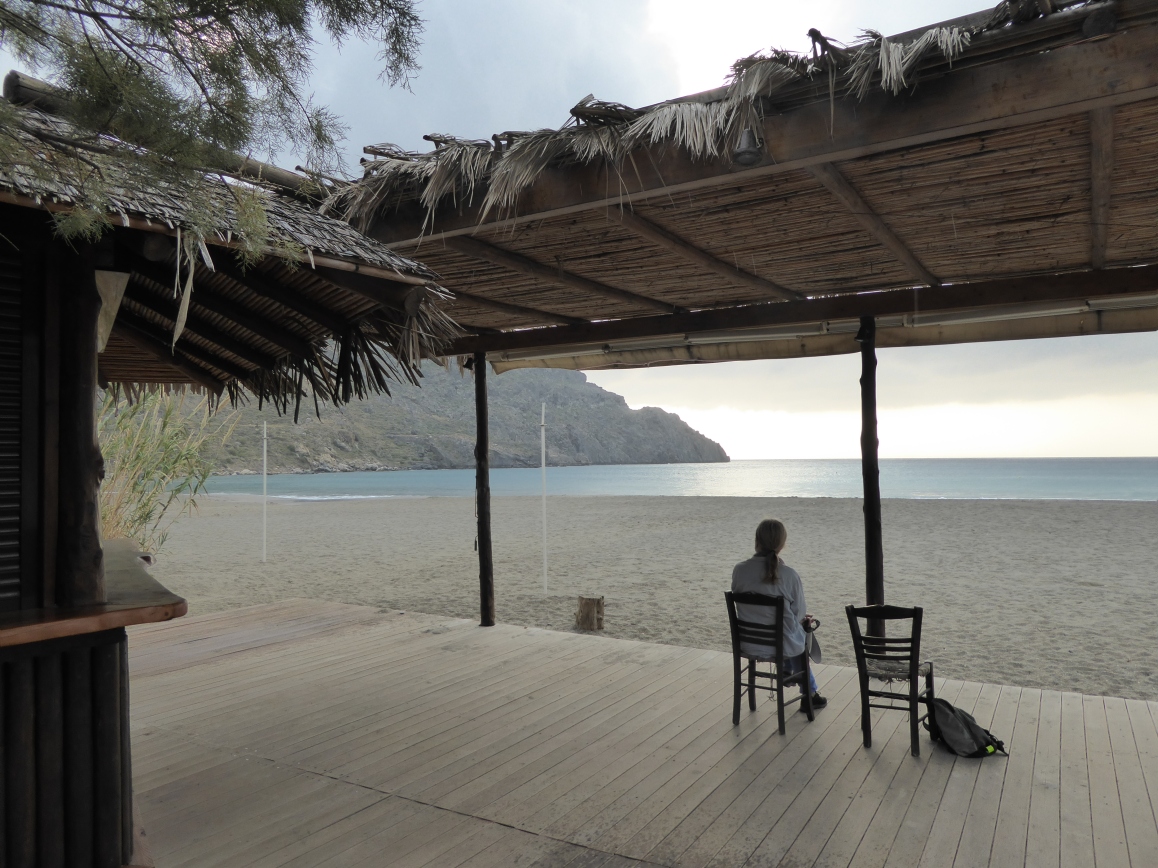 For me, home is a hard place to find.

Where ever I go, I feel restless.

‘Home’: its a place in the mind and I have to struggle to find it.

I’d seen plenty of stray casts elsewhere in Greece, feeding from the rubbish bins. They looked pretty scrawny. Undernourished. It was hard to look at them actually. It was like mistreatment of animals except for the fact that if it wasn’t for the rubbish bins, those scrawny cats wouldn’t have existed.

Not Alby and Casey. It was easy to look at them. They were two fine looking cats.

Still, if someone owned these cats, then he or she didn’t seem to spend much time with them.

Sometimes we saw Alby and Casey during the day, lounging around under a tree or sitting on top of the low stone wall in front of the hotel.

One person I thought who might be able to tell us something about Alby and Casey was the hotel proprietor. Usually she appeared once a day at the hotel in a small black Japanese four-wheel drive – amongst other things, to clean our room and give us fresh towels.

But we never knew when she would appear. There was never a regular time.

She lived outside the town, on a mountain side overlooking the bay. She and her husband and sons were busy picking olives. It was that time of the year. Almost everyone it seemed was out on the slopes picking olives.

The proprietor turned up one afternoon and I got talking to her and in due course asked about Alby and Casey.

They didn’t belong anywhere those cats, she told me, they were strays.

This is what I discovered about the cats’ journey ‘into town’: there was an old woman who fed the stray cats during the winter.

’20 cats, sometimes more….like camps for the unemployed in Athens..’

The evenings sitting under the thatch roof of that deserted snack bar and looking out to sea are still very much alive in my mind. They form a scene of tranquility, somewhere I can find inner calm.

Anya and I, stars, darkness, an inky expanse of sea – and Alby and Casey, somehow perfectly content to sit near us and share our presence.

Sometimes I talked to them. Told them stories. Even asked them questions.

‘Alby, Casey: ‘Have you ever thought about what lies at the other end of the sea we are looking at?’

No answer. I didn’t need one.

‘Libya: that’s what lies at the other end of the sea we are looking at’.

Libya: its a bad place for cats. A bad place for humans. Civil war, guns, killing. Chaos. The normal people though, they like cats. Mohammed liked cats, I understand. No it’s terrible there now. For you and for us. Cats and people.  ‘

I didn’t tell Alby and Casey about the great Western coalition which had launched a massive attack on Libya in order to remove the dictator Muamar Gaddafi and his degenerate sons. I didn’t tell them about all the Western posturing, the grand talk of liberation, and all that. I didn’t mention the awful truth; that the people of Libya were far worse off now than they had been under the dictator.

I tried to keep things simple.

I figured you had to do that when talking to cats, but then again, I was probably doing it for myself.

Keeping things simple had its attractions, especially if you wanted to spend some time at home.

“Yeah, Alby and Casey, you and us: we’re at the right end of the water. It’s safe here. No war, no killing, no guns and bullets and bombs. We can sit here and wile away our time looking. And I have to say, you cats can certainly spend some time looking. Must be your big eyes. Plus the tourist summer behind you I guess. I wouldn’t fancy our chances over there in Libya. We’re safe here though. Time passes and we can watch it passing. You and us, we’re the souls of a peaceful place….

One day, it must have some kind of premonition, Anya asked ‘have you taken any photos of Albi and Casey yet?’ 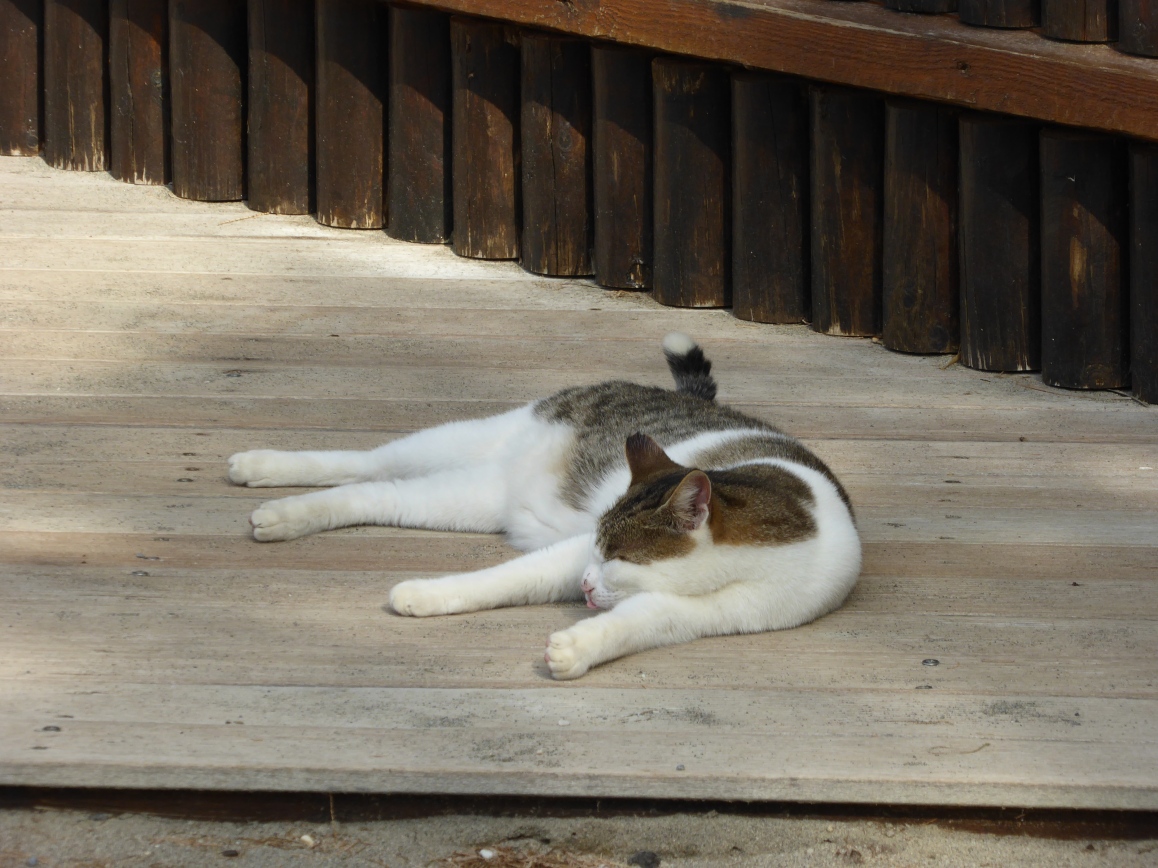 The weather fined up but sitting under the thatch roof at nights had lost its allure.

Home, experienced for a couple of weeks, could no longer be found.

Alby and Casey were gone. 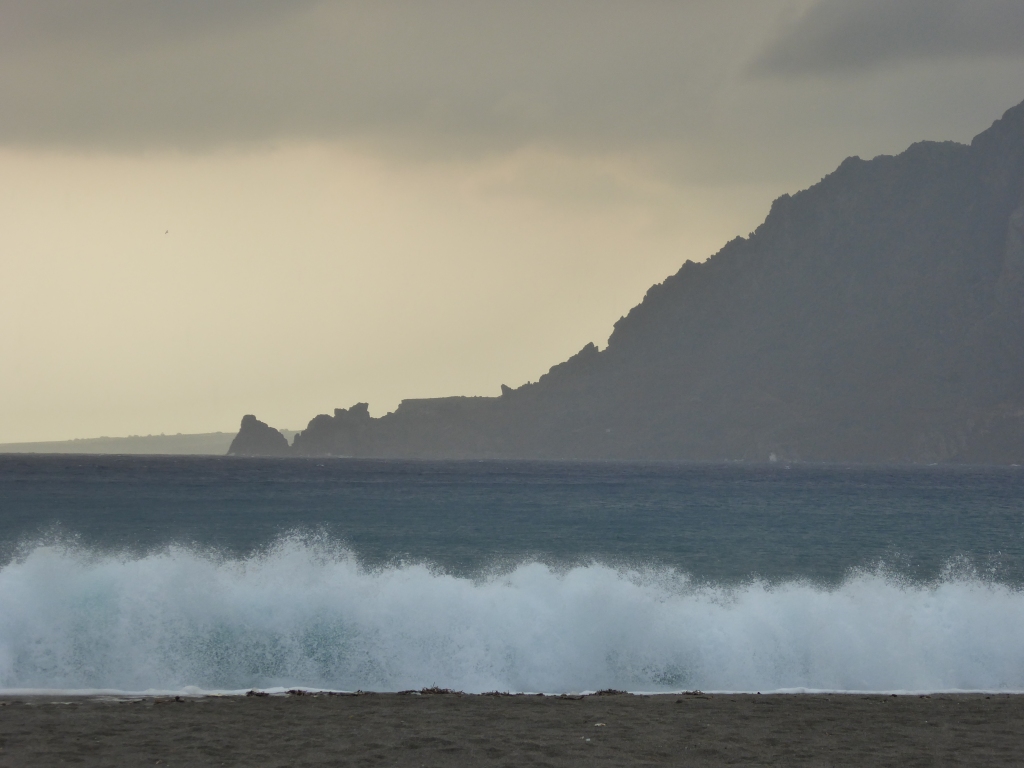