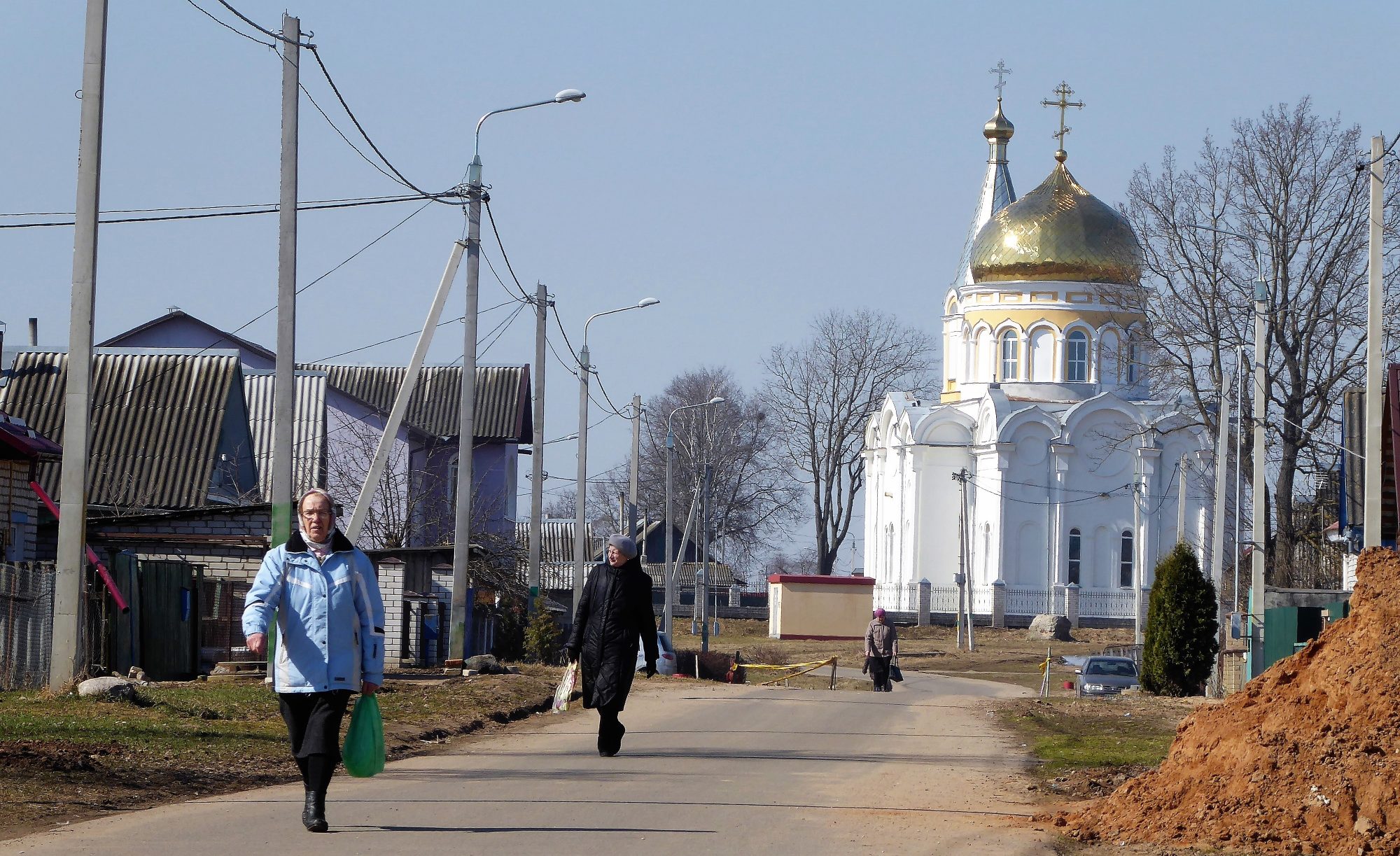 It took us a day to get from the Austrian border to the Hotel Zamecek in the west of the Czech Republic. We had to catch two trains and a bus to reach the town of Kaplice, from where we walked to the hotel. We followed a road out town. The traffic wasn’t too bad but our rucksacks were heavy and it was a warm day.

Late in the afternoon, tired and jaded, we saw it: the Hotel Zamecek.

It was surrounded open grassy fields and pine forests.

Our room was on the third floor. Whilst ascending a wide, stone staircase with a high stone balustrade we noticed that the original decorations on the ceiling and walls had been freshly repainted. The hotel, obviously old, had been beautifully restored.

In a large open area at the top of the stairs, there was a polished wooden bookcase with books left behind by departing guests. After putting our rucksacks down and showering and putting on fresh clothes, I went to the bookcase. Anya loves maps and I love books; whilst I was perusing the books, she was in the room pouring over a map of Bohemia; we planned to do some walking in the area.

I found a few books in English. There was one which caught my attention.

‘The Metamorphosis’ written by Franz Kafka.

I grabbed it and put it in our room.

Then we went downstairs to order a meal. We were famished.

We sat on the terrace.

It was on a low balcony with a railing. It was a fine afternoon and there was a magnificent view of a swift flowing river and behind it, a steep slope covered in tall pines. Anya and I sat down at one of the tables. The other guests sitting around were Czechs who’d driven out from town to have a meal and few drinks before returning to Kaplice.

We ordered a couple of red wines and a meal. It was a beautiful setting to be wining and dining; the sun shone above the tips of the pines and lanced on to the large open area between the hotel and the river. The sound of gurgling, crashing water reverberated through the air. Behind it, merging into the background, was the sound of people speaking Czech, underlining that feeling of strangeness, of being somewhere else, which is one of the great attractions of travel.

That night, I began reading The Metamorphosis, which also took me to somewhere else, somewhere far less convivial than sitting on the terrace of the Hotel Zamecek.

“One morning, when Gregor Samsa woke from troubled dreams, he found himself transformed into a revolting insect……´

I´ve read few opening lines in a novel which have made such an impression on me as this one.

‘He lay on his armour-like back, and if he lifted his head a little, he could see his brown belly, slightly domed and divided by arches into stiff sections. The bedding was hardly able to cover it and seemed ready to slide off any moment. His many legs, pitifully thin compared with the size of the rest of him, waved about helplessly as he looked on.

‘What’s happened to me?” he thought. It wasn’t a dream. His room, a proper human room although a little too small, lay peacefully between its four familiar walls. A collection of textile samples lay spread out on the table – Samsa was a travelling salesman …..

“How about if I sleep a little bit longer and forget all this nonsense”, he thought, but that was something he was unable to do because he was used to sleeping on his right, and in his present state couldn’t get into that position. However hard he threw himself onto his right, he always rolled back to where he was. He must have tried it a hundred times, shut his eyes so that he wouldn’t have to look at the floundering legs, and only stopped when he began to feel a mild, dull pain there that he had never felt before.

He looked over at the alarm clock, ticking on the chest of drawers.

It was half past six…it was even later than half past, more like quarter to seven. Had the alarm clock not rung?

What should he do now?

If he was to catch the next train he would have to rush like mad and the collection of textile samples was still not packed….

What about if he reported sick?

But that would be suspicious because in fifteen years of service Gregor had never been ill. His boss would certainly come round with the doctor from the medical insurance company and accuse his parents of having a lazy son, work shy….’

A man wakes up one morning and discovers he has been transformed into a revolting insect – and he’s worried about being late for work and branded as ´work shy´!

On cue, a clerk representing Samsa´s employer appears at his family home and, banging on Samsa’s bedroom door, exclaims:

‘What’s going on, I’m astonished! I thought I knew you as a calm and sensible person and now you suddenly seem to be showing off …’

Black humour, I loved it!

As Gregor eases his insect body out of bed and slowly makes his way towards the door, he tells the chief clerk that he has been ‘suffering from bouts of dizziness’ but never mind, he is ever the dedicated employee ready to do his best and is determined to be ‘at the station by 8am.’

But the clerk can’t understand what Gregor has said and turns towards Gregor’s distraught parents and exclaims:

‘Did you understand a word of that? That was the voice of an animal…’

Crawling ever closer to the door, Gregor reflects: ‘They can’t understand my words anymore though these seem clear enough to me – perhaps my ears have become used to the sound.’

At the door, holding himself against it with the adhesive tips of his legs, Gregor grabs the key with his toothless jaws. He eventually manages to turn the key and pops his insect’s head around the corner and explains to the clerk and his parents (who can’t understand him):

‘I’ll get dressed now pack up my samples and set off….I’m not stubborn and I like to do my job…’

The clerk, minutes before a picture of arrogance, gasps, presses his hand over his mouth, and flees in high panic, bolting down the stairs to the front door two at a time. Gregor’s mother, swooning, sits down near the table laid out for breakfast and knocks over a coffee pot which sends coffee gushing over the carpet.

Gregor yells out ‘mother!’ ‘mother!’ and can’t help ‘snapping  his jaws at the sight of the flowing coffee’.

Gregor’s father drives the insect back into his room, hissing at it and waving it on with a newspaper and a walking stick. Gregor however has a problem: he has no ‘practice moving backwards and is only capable of doing so slowly’. His insect body is too wide to fit through the half open doorway. Terrified of his father behind him, he tries to force his way through the door and finds himself tightly wedged. One of his flanks scrapes on the door ‘leaving vile brown flecks on it’; he is stuck, with the little legs on one side of his body ‘quivering in the air whilst those on the other side are pressed painfully against the ground.’

His father gives him a hefty shove from behind – ‘and sends him flying and heavily bleeding into his room.’

There are few novels which have transformed the novel like Kafka’s ‘The Metamorphosis’.

The idea of a man waking up and finding himself transformed into something utterly repulsive to the human beings around him has proved to be immensely fertile ground: it is the most powerful symbol of alienation ever invented.

The truly chilling aspect about the fate of Gregor Samsa is his transformation into a ´monstrous vermin´ in his own home: in the very place where he ought to feel safe, loved and wanted. There is a mysterious, ill defined, danger hanging over the head of Gregor Samsa. He is being torn away from every connection with the human race and his own humanity – and for no reason.

What kind of person wrote an outrageous tale like this?

And what is the novel’s deeper significance, its meaning?

In Kafka’s dark and comic tale, the ‘revolting insect’, after a series of tragi-comic attempts to be reconciled with his family, crawls under a couch and dies.

Kafka wrote ‘The Metamorphosis’ in 1915.  Great novels are richly prophetic. They take you somewhere, even to places you might not want see.

When I began reading ‘The Metamorphosis’, I embarked upon a journey began at the Hotel Zamecek ……and ended at the Hotel Europe.

A hotel where Jews were not welcome…..