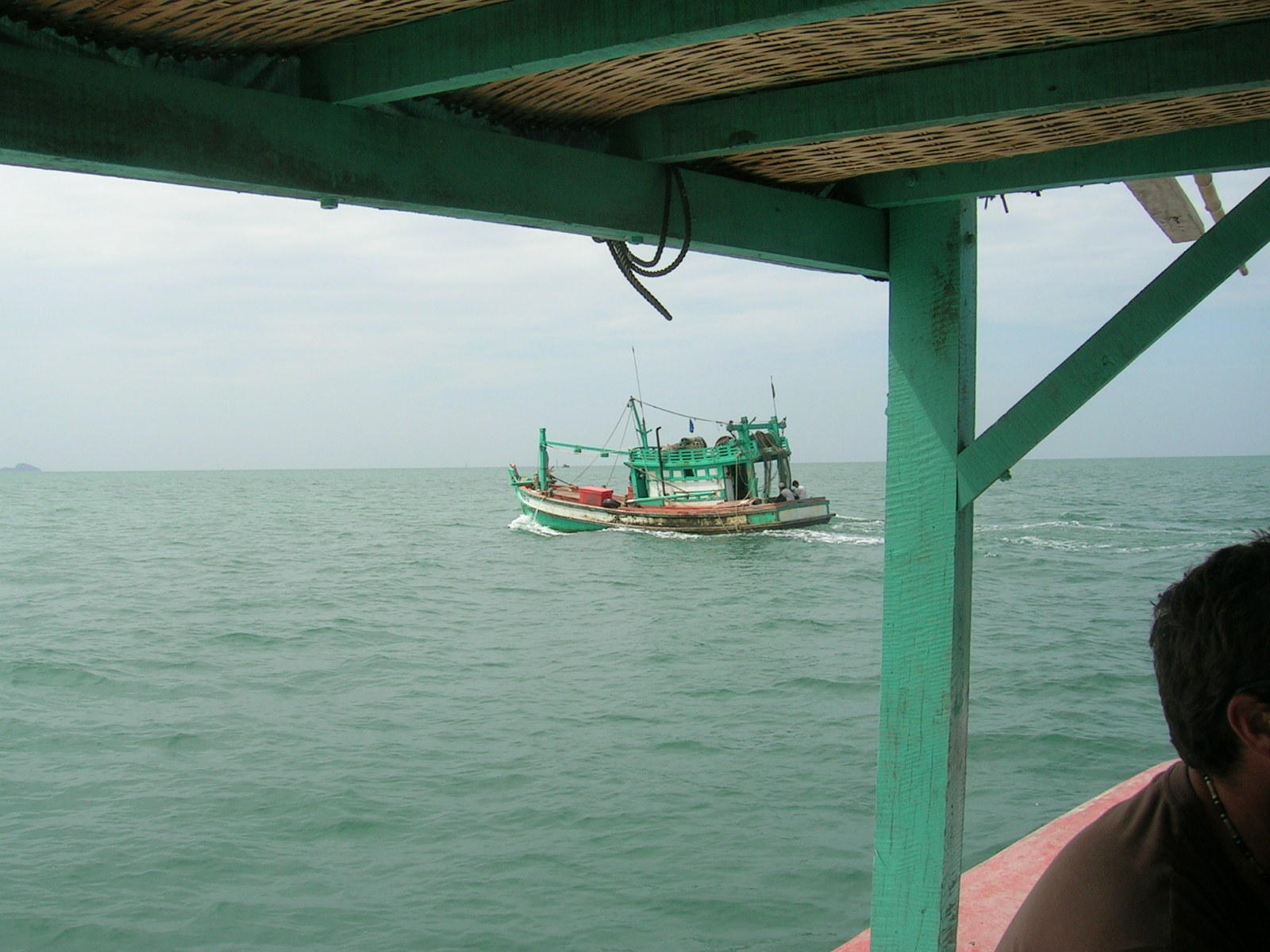 Vailankanni: we both made the same mistake.

When we read in our guide book that it was a former Portuguese trading outpost located on the south east coast of India, we imagined something akin to Goa and Dieu (their antecedents also Portuguese) on the west coast – only without the tourists.

We thought we had found a hidden gem.

And well, the few lines in our guide book about Vailankanni were written by a travel writer who had never been anywhere near the place.

So there it was; after a long day travelling on local buses, hot, overcrowded, sitting on hard wooden bench seats or standing in an aisle crammed between people, we were expecting to arrive in a place with deserted pristine beaches fringed by palm trees….

There were thousands of milling people.

Goa and Dieu had been overrun by tourists, Indian, European and Russian.

Vailankanni had been overrun by pilgrims.

In the former, no one would have noticed us.

In the latter, we were outrageously conspicuous: the only Caucasians and furthermore, the only non-believers.

Vailankanni was a Catholic Christian pilgrimage site dedicated to the Virgin Mary.

It claimed to be the ‘Lourdes of the East’.

That was hardly a recommendation.

Lourdes, a world famous pilgrimage site in the south of France, rose to prominence during the 19th century, when – as the story goes – a young village girl named Bernadette went to fetch some firewood with her sister when a Lady who was ‘indescribably beautiful’ appeared to her. The Lady told Bernadette to dig in the ground at a certain spot and to drink from the small spring of water that began to bubble up. Thereafter the Lourdes spring water became famous amongst Catholics for its supposed curative properties. In recent times, millions of them from all over the world flocked to Lourdes and reported experiencing miracle cures due to bathing in the holy water or drinking it.

The Vailankanni site was based on an Indian version of the Lourdes tale. In this case the Virgin Mary appeared before a Hindu boy carrying a pot of milk who had rested under a banyan tree. She asked him for some milk for her baby and he gave her the pot. When he turned up at his employer’s house with an empty pot, the employer was not happy: then a miracle happened and the pot filled up to the brim with milk.

In one of the tales, ‘Our Lady’ worked her wonders with water and in the other, with milk.

Often the best moments of travel are the unexpected ones, when seemingly well laid plans go awry. This however was not obvious to us on arriving at a place which contrasted so dramatically with our expectations.

And the process of finding somewhere to stay did not improve matters either.

There were dozens of pilgrim lodges catering for every budget but as we discovered, most of them were full.

There were lots of privately run hotels and lodges but most of these were full too.

Finally after traipsing around in the searing heat, we got a room for an extortionate price on the top story of a drab, narrow multi story hotel. The view from the rear window was hardly sublime: a rubbish dump where lower caste people emptied carts of foul smelling refuse and crows and dogs.

I watched a cow eating out of cement rubbish bin and felt sorry for her.

I liked cows, liked their peaceful nature. Once, India’s cows had lived on the land in what was a predominantly agricultural society. Now the poor things fed on scraps – and discarded paper.

The view from our front window was rather different: in the distance, surrounding by thronging people, freshly white painted spires soaring into the sky. This was the main ‘cathedral’ and it was the first place we visited.

Perhaps there’d been a time when this cathedral was authentically Portuguese, but it had undergone endless reconstructions. Inside, it was unremarkable. It had been divided into two sections. In one section there was a narrow hall dedicated to Our Lady. On the wall at the end was the ubiquitous image of Mary and her baby Jesus, which could be seen all over the pilgrim site in digitalised colour reproductions, some of them huge.

It was like no image of Mary I had ever seen.

She was portrayed as a resplendently dressed Queen clad in long golden robes with a tall golden crown on her head, a gold sceptre in her right hand, and in her left, a little baby Prince Jesus – who was also attired in golden robes and sporting a tall gold crown.

A bit different to the image of Mary and Jesus that I had grown up with.

There was a tight knit crowd before Our Lady.

Everyone had left their sandals and shoes outside the entrance and were kneeling with their hands pressed together.

In the other section of the church was a wide room with a low ceiling from which loops of bright red tinsel hung as if it were an office decorated for a staff party. At the front, there was a podium and microphone. Next to the podium, on a raised platform, was a doll house recreation of the birth of Jesus. There were coloured plastic figurines of Mary and Joseph and baby Jesus and the three wise men. There were camels and cows and sheep. It looked like something which a bunch of primary school kids had put together as an end of term project.

In front of it, on the floor, were people kneeling, locked fervently in prayer. Others were lying on the floor, completely prostrated.

It was incredible the extent to which some pilgrims went in their worship of ´Our Lady´.

And this was just the start.

During our excursion around the Vailankanni site, we saw many other examples of it.

At a shrine called ‘Our Lady’s Tank’ – reputedly built at the site of the banyan tree where the Blessed Virgin had appeared to the Hindu boy with his empty pot – there was of a wide bed of sand flanked on each side by stone paths. On the sand there were people edging forth on their knees, crawling on their hands and knees, or, lying on their sides and rolling. The distance to the shrine was a good half a kilometre and it was hot: the devout had an awful lot of edging, crawling and rolling to do. On the stone paths were long streams of people. Some of them were chanting, others, singing. At regular intervals on the way there were alcoves featuring scenes from the story of the crucifixion of Christ portrayed in the by now familiar plastic figurines.

At the end of the long stretch of sand, thick with pilgrims, a brisk business was going on selling plastic bottles of Holy Water and Blessed Oil. (milk was not an option given the hot southern Indian climate)

In the afternoon we followed a long arcade, lined with shops and stalls, to the beach.

Our idea was to walk along the coast for a way.

The beach was crammed with pilgrims.

It had no religious significance. It was a place to relax after visiting the shrines.

I had to smile; this was the beach where we had planned to spend idyllic days swimming.

We joined the masses. It was late afternoon but still very warm.

A couple asked us about where we came from and so on and from that point a conversation got going. Others around us listened in.

How are you liking Vailankanni?

The question was asked in a way which clearly anticipated a positive reaction. The enthusiasm was palpable.

We said we found it very interesting.

This was not the answer that was expected or wanted.

People assumed that we were Christians come to pay our respects to ‘Our Lady’.

When we explained that we were tourists just taking a look around, we were met by looks of surprise.

No….we don’t really have a religion

You don’t believe in God?

But it was when, under further questioning, we added that we didn’t believe in any kind of god – that we were atheists – that the disappointment metamorphosed into utter amazement.

It was as if we were Martians landed on planet earth. Albeit in the midst of a mass of earthlings.

A blitz of questions, of incredulous inquiries mixed with rejoinders to our unthinkable, illogical atheism.

‘Everyone will worship different gods. In the end, all is one. All the gods all over the world we can think of as one great divine being. ‘

‘If there is no God then everything is permitted. People can commit any crime, they can kill and murder and rob….’

The one truly divine essence I detected here was the comedy.

If there was a God, then she, he or it was a real joker.

We had come to Vailankannni to escape the tourists and surrounded by pilgrims….were quick to describe ourselves as….tourists.

We had never planned to come to this place. It had been a major miscalculation.

And here we were, on a tropical beach surrounded by people peppering us from all sides with questions about our belief – or rather, absence of belief.

Yes: the very same people who worshipped plastic figurines and unlikely images of a queen and her baby prince, who bought bottles of holy oil and holy water and thought it ‘normal’ for worshippers to grovel on tiles and crawl and roll over a bed of sand in the hot sun….

These people were flabbergasted at the sight of two self-confessed atheists.

It was only then that something dawned on us, although the evidence had been overwhelming, only it hadn’t registered in our tired brains, jaded after all morning on bone rattling buses, not to mention the shock of arrival.

Many, if not most of the pilgrims, were Hindus and not Indian Christians.

It’s easy to understand how Hindus might find an affinity with Catholicism. Idol worship is basic to both religions, along with rituals, miracles and mysteries. Just as the Catholics have their saints, so the Hindus have their deities. In the sculptured gods and demons in the gopuram of a Hindu temple is the equivalent of a grand altar in a Catholic cathedral. The antithesis of Hinduism and Catholicism are Islam and Protestantism: religions which very explicitly forbid all forms of idol worship, ritualism and ceremony.

The Virgin Mary was a symbol of the compassion of a woman and a mother and there was no Hindu deity like her, so the Hindus were happy to adopt her.

That night, we wanted to attend a mass in the basilica. Every day, masses in five Indian languages, and English, were held. But we got the timing wrong and as we approached the basilica, people were pouring out on to the pavement outside, which was already quite crowded with people out for an evening stroll. Music was playing from loudspeakers. It was identical to temple music with drums, flutes, clarinets, and interchanging male and female vocals.

Then She appeared, another highly revered Lady for the Hindus: Mother Cow.

Around her neck hung a garland of flowers and another one of sparkling tinsel. As She plodded along, metres away from the brilliant white painted wall of the basilica, the crush of people miraculously separated to let Her pass unimpeded.

I did a double take; it was the cow I had seen earlier in the day munching on a newspaper.

From garbage forager she had been transformed Cinderella-like into a Queen.

Sure, it was a miracle.