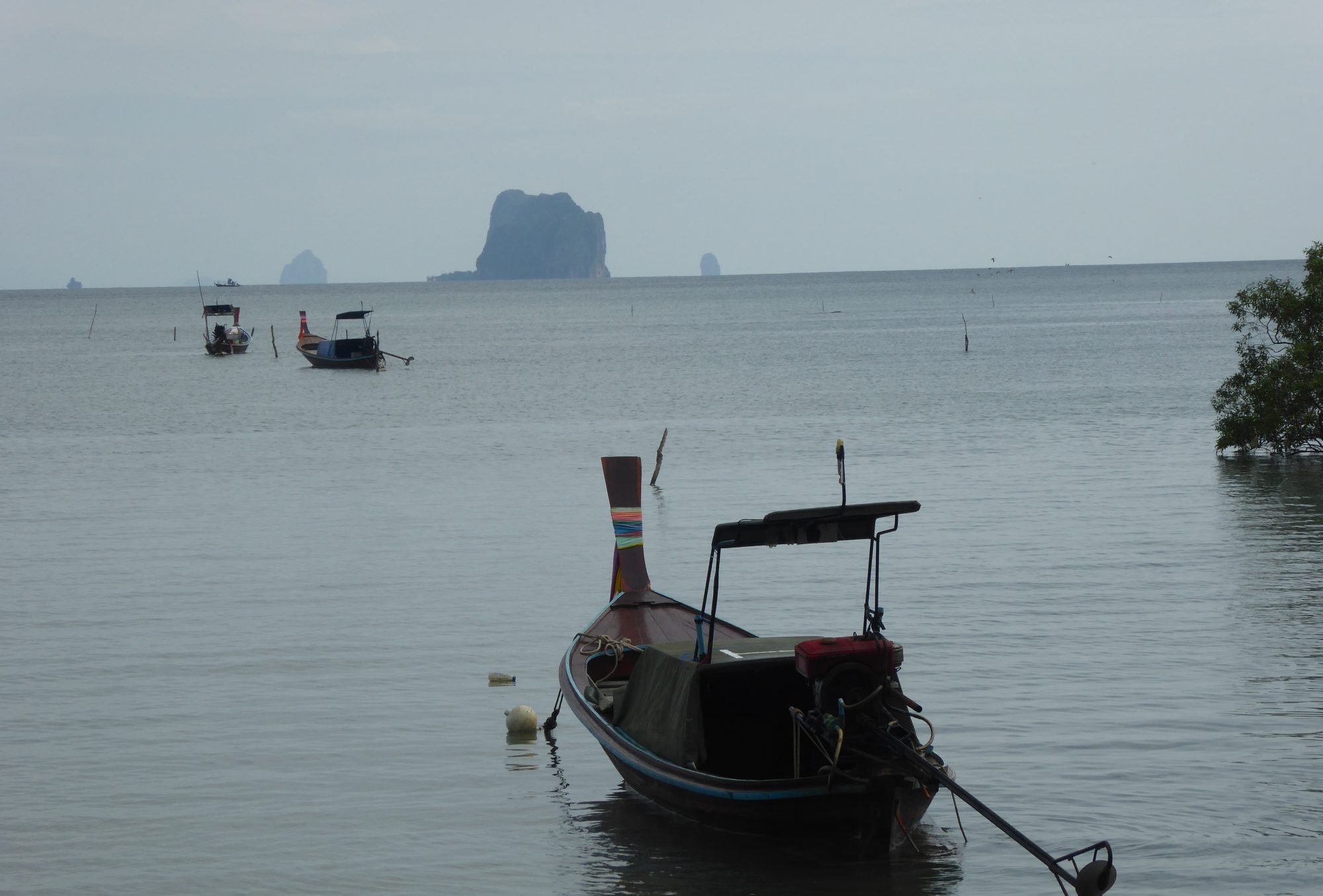 The guest house where we were staying was beautifully situated, on a headland.

From the veranda of our thatch hut, we had a view of jungle clad mountains sweeping down into a deep elliptical bay.

Set back in the palms crowding the bay and only partly visible, were the small houses of fishermen.

Their boats however, small, simple wooden outriggers, painted in bright colours and bearing inscriptions from the bible, rested on the narrow beach and could be seen from far distant.

One afternoon, sitting on our veranda, we watched the fishermen go out on their outriggers.

The sea was calm, and schools of fish were intermittently breaking the surface of the water. It was quite a sight: an area of the otherwise placid ocean suddenly became turbulent and looked as if the water was boiling; some of the fish sprang into the air. In any one school, there might be hundreds of fish.

By this time, we were used to seeing this, but in the beginning, during our first days in The Philippines, it took us by surprise, especially when we were swimming and a large school of fish serviced near us.

We had swum in oceans in many countries including Australia, Cambodia, Croatia, Greece, India, Malaysia, Portugal, Spain, Sri Lanka and Tunisia – and never seen anything like it.

Fact is, most of the world’s oceans have been depleted of their fish due to commercial and amateur fishing.

On this afternoon, there were several schools of fish which regularly swam en masse to the surface and then dived again; the churned-up areas appeared and re-appeared in different places. There was a storm on the way and it’s possible that the fish had come into the still waters closer to shore to feed, before the encroaching bad weather, when they would retreat to deeper water.

A group of the local fishermen, who had small motors on their outriggers and nets attached to the back of their boats, went out to try and take advantage of the situation. They puttered around, keening their eyes to see where the next school of fish might surface – and then head over there as fast as their little craft would allow them.

They watched the water keenly and as soon as the water somewhere began to become ruffled, off they’d go, racing each other to get there.

Sometimes several areas began to swarm with fish at the same time and they’d head off in different directions.

Watching these fishermen in action, I thought of the times Anya and I had ridden our bikes in the coastal areas of The Netherlands and Denmark and seen fishing trawlers tied up in harbours: huge, high-tech machines worth millions of Euros, bristling with radar dishes, aerials, winches and cranes; above deck an observation tower, below deck, huge refrigerated holds. The men operating these machines were no doubt skilled in the use of the latest electronic gadgetry.

I let my thoughts run here for a bit.

Imagine taking two fishermen from here, I mused, and sending them to Europe to accompany a trawler on one of its runs out into the North Sea. Then, sending them back home accompanied by two European fishermen who could take a close look at fishing in the Philippines.

Then record the impressions of both lots of fishermen.

What a story that would be!

But I would never get to write it.

I could only use my imagination.